Note from the author: Triveni (Chabedia) Popat was born in Karachi, British India, on October 27, 1927, and passed away in Massachusetts on November 6, 2016. She studied Social Sciences at the Banaras Hindu University, and received an MA in sociology from the University of Texas in Austin. Triveni’s involvement in the Gandhi liberation movement resulted in three incarcerations and a lifelong commitment to freedom, equality, and social justice. From her teenage years, Triveni was involved with the Ramakrishna Order. She was a close disciple of Swami Ranganathananda and Swami Sarvagatananda. Together with her husband Pran, Triveni served and frequently hosted monks and devotees from the Vedanta Centers of Providence and Boston in their home. Following are reminiscences of Triveni drawn from our friendship during the last twelve years of her life. 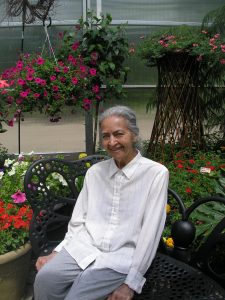 If I had to think of only one word to describe Triveni, that word would be rasa. In Sanskrit, as in Hindi, the word rasa has several meanings, and each of them can be said to relate to Triveni. The most common meaning of rasa is “taste,” both the palatal taste and the taste of the arts, the taste of beauty. Triveni was not only a great cook who enjoyed hosting family and friends, but she manifested an artful beauty that remained with her to the end of her life. Being a dancer and an exceptional yoga teacher, Triveni had trained her body with rasa. Every movement of her arms, hands, or eyes radiated beauty. But she had also trained her spirit. And when her body started weakening, Triveni’s inner rasa was revealed.

Of the twelve years that I knew Triveni, it was only in the first two or three years that she was still capable of moving around and engaging in long conversations. During that time, she taught me many subjects: yoga, how to cook mixing all the right ingredients—particularly turmeric, which according to Triveni can be used for everything from a cure for pimples to an indispensable spice. She also taught me how to give massages, how to practice pranayama, how to be patient, and how to be spiritually free and confident. These teachings were already a lot to digest. 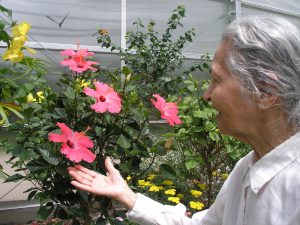 But the real teachings began when Triveni’s daily habits were interrupted by the onset of Alzheimer’s disease. Slowly and painfully, she had to give up everything that commonly defines a person’s identity: her independence, her capacity to make decisions, her productivity, and even her speech. Deprived of the ability to follow up on her own actions and intentions, Triveni’s spirit quieted down. A very pure love rose from within. Another meaning of rasa is “essence.” And Triveni’s essence was joyful love.

When she could still walk, members of the community would take turns bringing her to the Providence Center for classes. Once we were running late for the class and Triveni was very quiet. I was concerned because she had not spoken to me at all during the trip. As we approached a traffic light, I sped up and managed to pass while it was turning red. Triveni then looked at me with big eyes and a smile, and said “Yes”! That “Yes,” along with her open eyes, has stayed in my mind as a sign of fearlessness, although that night she didn’t speak again.

One of my most beautiful memories of Triveni was one day that I took her to a butterfly exhibit at Roger Williams Park, Rhode Island. We walked very slowly, as she contemplated every leaf and every small petal of every flower. It was like a magnified experience of the beauty of nature. The butterflies came and sat on her open palm, and she was as if communicating with it all, the leaves, the flowers, the butterflies. I made it my purpose to not walk faster than Triveni. If she stopped, I stopped, and when she continued I would continue, as in a walking meditation. Together, we listened to the birds, felt the air, the heat of the sun. Her smile was infinitely sweet, but also intense, challenging. 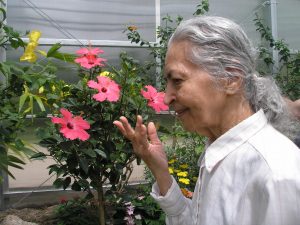 When she could no longer welcome me at her doorstep, make me chai, or talk with me, Triveni would put all her love into her smile. I felt as if she was a life-giving fountain just waiting for me to come and sit next to her. Being with Triveni, in silence, looking at her smile, was simply healing. And I believe she knew it. That was the case on the last day that she could see me, Dussehra Day, October 11, 2016. I arrived around 10:30 in the morning, She was sleeping. I sat next to her and played some aratis on my phone. Then she became very alert and followed the rhythm of the music with her head. That day she allowed me to feed her lunch, and I remember repeating to her, “you are so beautiful.” She smiled and looked intensely at my eyes.

Many times I wondered what was it with this woman. What made her so powerful and attractive, even while being approachable and loving? Being with Triveni as death approached, watching her breathe in and breathe out, I understood that there was not an easy way into the mystery of Triveni’s life. She not only travelled and died thousands of miles away from her birthplace, but accomplished greater distances of learning and transformation in this one lifetime, where some of us were fortunate to encounter her.

“I am fool number 1,” I heard Him say. Like to a magnet this other fool was attracted. Read More

(H)e lent abiding support and guidance to the organization from the early days of its formation. Read More

A Reflection of the Guru’s Instruction

To know Courtenaye Olden, to be with her, was to be immersed in the words and teachings of her guru.. Read More

Everyone can break down something, but how many can build it up?

From Among the Articles

Wasn’t this virtual world simply a new manifestation within, as well as a representation of, the illusion of Maya? Read More

Being linked directly with love, we cannot avoid feelings of sadness and loss. Read More

A person of knowledge is in complete control. He finds satisfaction within himself. Read More

Tell Us What You Think

We welcome your feedback.
Click Here to Email Us